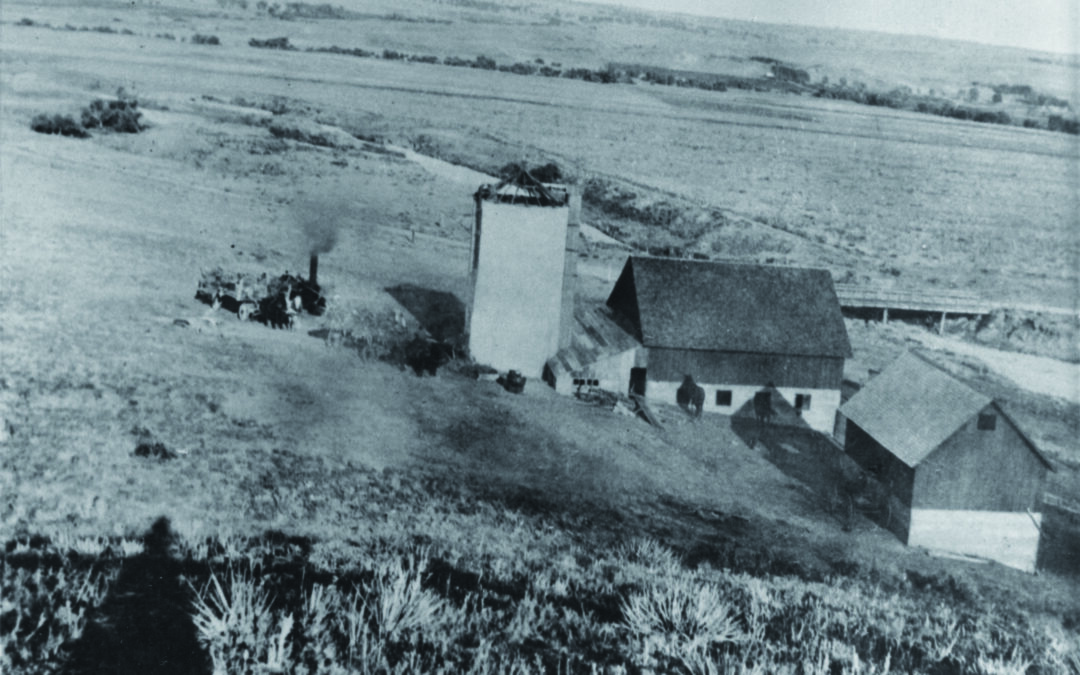 In last month’s issue of Red Rock Views, we learned about Grace Carron, a widow from Cleveland and her nephew, Bill Watkins, owning the Willow Springs Ranch and Dairy from 1941 to 1947.

Willow Springs resident Ron Versaw provided me with a memory book written by Veronica Arington who lived and worked on the dairy farm during that time with her husband, Hugh.  After finally finding in Kansas Veronica’s daughter, Lila, who lived here from 5th grade to 9th grade, I was able to share some of Veronica’s moments from her booklet.

In this second part of the series, I introduce more of Veronica’s subjects and then let her words, exactly as she wrote them, explain it.  Thank you Ron Versaw for sharing what you had with all of us!

Veronica says the horses on the ranch weren’t a necessity because it wasn’t a working cattle ranch.  But to Mrs. Carron and Bill, the horses were a must, even though they were strictly for pleasure.

“One of the earliest horse wranglers bought a bunch of Morgan and quarter horse mares.  They thought they would raise colts and make a lot of money.  The price of horses went down so they decided to sell the mares.  They had a sale and some of the mares only brought $18 or $20.  There were a few that brought a little more.  That turned out to be quite a tax write off.”

Veronica said they could always ride the horses if Mrs. Carron’s friends weren’t out on them.  She says they all enjoyed riding and that Lila, who fell off a horse one of the first times she rode one, even got over being afraid.  And Veronica says they had some good horses…like Whiskey.

“He was a good cattle and riding horse…then there was Nuisance. 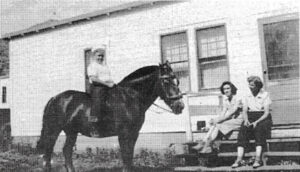 He was a small black horse and the irrigators rode him a lot during the irrigation season.  Mrs. Carron had a little Welsh pony.  He was a little bigger than a Shetland but moved about the same.  She always said he was just her speed.    There was old Dan who was a good work pony.”   She also says “Lila generally rode old Dan.”

“Many of the Air Force boys were brought back to Lowery Field for rest and recreation or were in the hospital there for rest from battle fatigue.  Bill would bring them out by the station wagon load and they could ride anywhere-anytime and for as long as they liked.”

Veronica said the bulls were quite a part of the ranch. 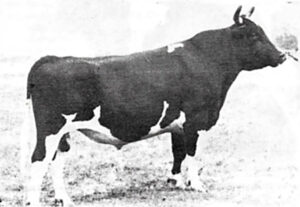 She says Golden Cross was a good bull but he was mean and no one wanted to go into a pen with him if they didn’t have to!

“He took spells when he bellered and pawed and really raised a rukus.  When he did this he generally got Admiral worked up too.  Between them they tore up one corral after another. “

“One time, when the auditors were going over the books, they questioned whether the bull pens were necessary as they were so expensive.  Whitey told them to go and see what they thought about it themselves.  They did and the bulls put on a real good show.  They bellered and they pawed, they threw dirt in every direction and hit the fence time after time.  They scared the auditors out of their wits and they all agreed the pens were a necessary expense.”

Veronica’s youngest daughter, Mary Alice, was only a couple years old when they lived at Willow Springs.  Veronica said, “she was the darndest kid for animals”.  One time she disappeared.  But Dave Braun found her and carried her back!

“He was white as a sheet but she was jabbering to him a mile a minute.  He had found her in “Golden Cross’s” pen.  Golden Cross wasn’t paying any attention to her and she was playing around his feet, head and all over him.  Dave was scared to death of that bull but he took a pitch fork and went in and got her.  The bull didn’t do a thing until they got out of that pen and then he put on a good show.”

Veronica also wrote about a tiny newborn fawn that the men found in the alfalfa field. 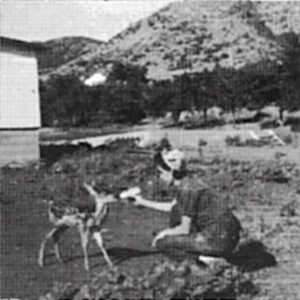 “The mother had evidently had twins and when the haymen scared her away, she probably took the strongest one and left the other one hidden, or so she thought.  Of course when the men found her they held her and petted her before they put her back…they came home and told me about her and that evening when we went into town I just had to stop and see if she was still there.  She was and she was still there when we came back from town.  We were sure that the mother had abandoned her so we took her home.”

Veronica says she fixed a bottle with formula she made with milk, water and a little syrup.

“I fed her this with a spoon and got up every 2 hours to feed her.  I kept this up all the next day and by evening I had her drinking out of a bottle.  By the next evening we couldn’t keep her in her box.  She just kept jumping out of the box and running all over the house, on the beds, the couch, where ever she could get.  When the next evening came she went clear back in our clothes closet and hid…she did this every evening and then just before dawn she would run out of the clothes closet and onto our bed.  She would lick our faces and run all over us and her little hooves were like razors.  A few days of that and she was relegated to the chicken house to sleep.”

“She followed me like a puppy.  If I was going to the washhouse or the bathroom she would run ahead of me and I would pretend I was chasing her.  When we got close to the washhouse she would run around the building and peek around the corner at me.  We had a great time playing hide and seek.  One time her playing wasn’t so great.  I always washed for the men in the bunkhouse and I had 11 suits of long underwear on the line.  In her wandering around she discovered them and proceeded to chew on one leg of each pair, just like a goat.  She got a swatting and was locked in the chicken house.  Needless to say I wasn’t very happy when I had to patch 11 pairs of underwear.”

Sad ending though…one day they discovered Bambi up at the mill.  The doors were closed so they didn’t think she got in, but it wasn’t long before she was sick and then died.  The vet thought she had probably eaten too much salt there or too much grain.  Veronica says they all missed her a lot.  The game warden told her later they would have had to eventually turn her back to the herd as it’s against the law to keep deer for pets!

Veronica also wrote about the kids that would come every summer from Littleton, Morrison and the Ranch to help with the milking, farming, irrigating and whatever needed doing.   One of them was “Little Kenny” who came out from Denver.  Kenny and some other kids set a fire in the balcony of a theater in Denver, was sent to juvenile court and put on probation to Bill Watkins, one of the ranch hands.

“He went to school at Bear Creek and he and Lila were freshmen together.  When they were initiated I dressed them up as Cave People.  He carried a big knotty club and wore his overalls on backwards with a shirt for his costume.  Lila had a bone braided into a stand up braid, on top of her head, and a ragged old dress.  He got such a kick out of someone caring enough about him to help him to do the things the other kids were doing.  He kept saying “don’t we look crazy, ain’t we having the best time?”

Veronica says she treated Little Kenny just like one of her kids.

“I loved him, scolded him, teased him and gave him a good bawling out when I thought he needed it.”

One day he brought his mother out to the ranch.  Veronica said she was pleased, happy and sad all at the same time.

“I heard him say as they came around the corner, “I want you to meet Mrs. Arington.  She’s the most wonderful mother in the world.  (I was pleased.)  “She wouldn’t let some other man treat her kids the way your husband treats me.  (I was sad at his lack of tact.)  “She loves us, she teases us, she scolds us and is just the kind of mother I wish you would be.”  I really felt sorry for his mother because by this time she was really crying.  Later his stepfather told the court he would try and treat him better so the court let him go home and we never heard from him again.”

Veronica wrote about BBQ’s they had at the ranch, about special friends they had, about people they got to know, like Sandy and Avery Tabor who ran Tabors Bar and Café on the north side of the street in Morrison.  She wrote about various people who worked at the ranch.

Some were there briefly and others quite a while, many of them known only by their first names.

While she lived at the ranch, they would go to dances at Tiny Town and at Grange Halls.  And there would be times to be concerned, just like we’ve seen with the fires in Colorado.

“At one time there was a forest fire up the canyon a few miles and several of the men went and helped with it.  Everyone in the community was very worried for a while.”

I do want to set the record straight, however.  After talking with Lila about her mother’s book, she was quite certain that her mom didn’t have it right about Lila “generally riding old Dan”.  Lila says she would ride him IF there weren’t any others available.  But she loved Nuisance.

“Nuisance was such an easy riding horse.  I loved to canter with him.  It was just like a rocking chair when you rode him,” Lila reminisced.   And just like today, an author, even if it’s your mom, is always subject to having an error in their story!

Veronica sums up her booklet by saying, “This was the story book part of my life and I loved every minute of it although every one didn’t share my feelings.”

Those of us living here love it BECAUSE of the beauty and nature that surrounds us.  When it was one ranch in this entire place, it must have been amazing!

Veronica Arington also ended her book as she started.  “Anything Could Happen at Willow Springs and it Generally Did.”