MOUNT LINDO–THE CROSS ON THE MOUNTAIN (Part I)

The first article I wrote for this magazine, Red Rocks Views, was in 2017 about Mt. Lindo, The Cross on the Mountain.  Since then, I uncovered more about the history of George Olinger, the man most responsible for what ultimately led to the cross being built.  I also found the man who actually built the cross!  And since we have so many new residents in our area, I thought this would be a great opportunity for an update.

The Mt. Lindo Cross is the iconic fixture located in the southern foothills of Denver visible every night across the city and out onto the eastern plains.  But newcomers usually don’t know it has a name, or the story behind it, or that it’s the tallest lighted cross in the country!  And most don’t know the most unique cemetery you can imagine exists right behind it!

This special landmark wouldn’t even be here if undertakers John Olinger (1851-1901) and his wife Emma (1861-1932) hadn’t moved to Denver in 1890 from Santa Fe.  They arrived with their 8-year-old son, George, and started their own mortuary at Platte & 15th Street.  This began the Olinger funeral business empire. 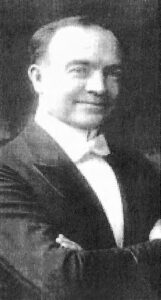 When John passed away in 1901, their only son, George, became his mother’s business partner.  George had already quit school at 15 at Denver’s North High to help run the business.  The next couple decades saw great expansion for Olinger Mortuaries, but George also began developing residential subdivisions, like the 160-acre summer home community in Jefferson County’s Parmalee Gulch, not far from Willow Springs.  He purchased it in 1919 and was responsible for the early development of the area.  Promotors of the community named it Indian Hills.  His first filing for those 160 acres was recorded in Jefferson County in 1923.  By 1925, the fifth filing had a clubhouse and golf course.

George also purchased mountain land for residential development about a mile southeast of Indian Hills.  Native Americans originally used this peak as a watch point and signal station.  George named it Monte Lindo, which was Spanish for beautiful mountain.  It eventually became known as Mount Lindo.

By 1944, George was in partnership with the husband of his daughter, Gwendolyn.  She married Francis S. Van Derbur.  By the 1950’s, Olinger Mortuaries was doing half of all burials in Denver.

The 880 acres at Mt. Lindo, however, was never that successful.  So, George sold the property to Francis.  Soon after that in 1954 George passed away at age 72.

Gwendolyn and Francis continued what her father started by acquiring other mortuary properties around Denver.  But keep your eye on the middle initials as this story goes on!  The father of Francis S. Van Derbur is Francis C. Van Derbur.  The father, Francis C., always thought Mt. Lindo was beautiful.  He told the younger Francis that he would like to be entombed on the mountain with his spot marked by a cross. 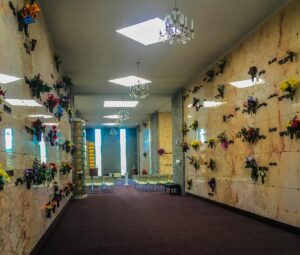 Mausoleum of the Cross

The younger Van Derbur, Gwendolyn’s husband, contracted to build the mausoleum in 1963.  The cross went up at the same time and he more than kept his promise to his dad by ordering that this cross be large enough to be visible to his mother, Pearl, from her Denver home.  He wanted her always to be able to see where her husband was buried.  Francis named the mausoleum “Mausoleum of the Cross”.  And when his father passed away in 1964, his body was entombed there.

The 393 foot tall Mt. Lindo cross was first lit on Easter night of 1964.  The arms of that cross span 254 feet across the side of the mountain.  It sits 7,660 feet above sea level and can easily be seen from 80 miles away to the east.

How could anyone back then know this would become a navigational marker for those traveling to Denver at night from the eastern Colorado plains.  There’s even an epitaph on a marker in the cemetery located behind that cross: “Oh look…there’s Denver”.

Building that cross was no easy task.  Get the details and meet the man who took on the job in Part 2 of “Mt. Lindo, The Cross on the Mountain.”