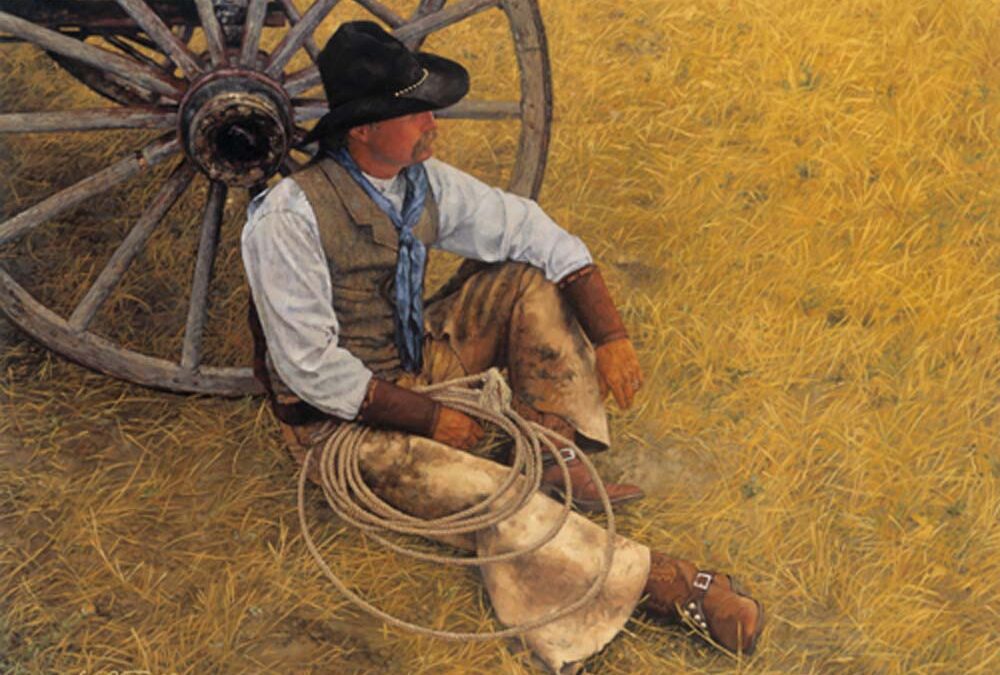 Remember that Kool-Aid pitcher with the broad smile?  How about the bowl of “M’m! M’m! Good! Campbell’s soup?  And surely we were all a part of the Pepsi Generation?  The common thread of these and many other successful advertising campaigns is Craig Tennant, Madison Avenue illustrator turned Western artist. 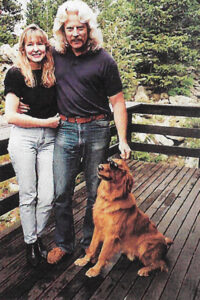 Artist Craig Tennant with his wife, Cheryl, and their dog Buddy at their mountain home west of Denver.

As a kid growing up in New Jersey, painting Western art wasn’t even a glimmer of inspiration yet; however, he did like cowboys and horses.  In fact, he so badly wanted to be a part of that culture that he was hoping his mother would tell him he was part Indian.

He wasn’t, but occasionally he’d go riding, until the diversions of the 1960s became too much for a teenaged Craig to keep an eye on that world.  One constant, however, was his ability to draw.  When he graduated from high school, he moved to Florida to attend art school.

“I could draw; there was no question about it,” he says, thinking back.  But why this 6-foot-tall weightlifter would go to art school mystifies even him.  “It wasn’t like I was consumed by art—I wasn’t at all.”  But art school was the smartest thing he could have done.

Several teachers cultivated real talent in him.  But his style of painting was so unconventional that it took 10 years to get over the damaging comments from one instructor determined to force Craig to conform.

“I still paint the same way that he said not to,” Craig says thoughtfully. 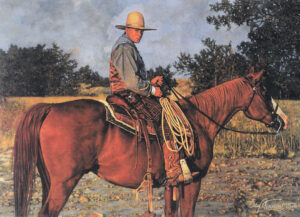 “I’ve also painted a lot more the way that he wanted me to paint, but it took me a while to get comfortable with that.  As a good teacher, he should have realized I couldn’t paint like that.”  He stayed in art school only a year.

In 1967, Craig headed for Madison Avenue and the advertising business.  He learned to cut mats, moved to mechanicals and then became an assistant art director.  Illustrating soon followed because his drawings were better than most other illustrators’ drawings.

It didn’t take him long to learn the ropes, and he always knew that the money was in freelancing.  By 1970, Craig was working in television for Dodge, Chrysler and Campbell’s soup.  He also illustrated magazine ads for Tareyton cigarettes, General Electric, Shaefer beer and Pepsi.

From here his credits read like a Who’s Who of the advertising world.  In 1972, he landed work for ITT Corporation, Digital, Ford Motor Co., Xerox, Volkswagen of America Inc., Porsche and others.  In 1980, he snagged TV Guide, Mechanics Illustrated, Sports Illustrated and Field and Stream.  With each step, the money and his work improved, and a distinctive trend became noticeable in his ability.

Craig could render a piece of work to look just like a photograph using felt-tip markers.  Anxiety over the use of oil paints still haunted him from his art-school days, so he avoided oils at all costs.  Even his first full-size paintings were started with felt-tip markers, then colored with pencils and finished up with paint.

He reasoned that if his work looked like a photograph, then nobody could criticize it.  In fact, he was so oversensitive, he wouldn’t even hang his paintings in his own house for fear that someone would scrutinize them.

By 1986, he was freelancing for Diet Coke, Mountain Dew, Old Milwaukee and IBM.  He also started a portrait print business reproducing exotic cars, race cars and their drivers.  He occasionally slid behind the wheel and gathered a few trophies along the way.

His talent and reputation brought him more and more financial success, but a turn soon came.  His married fell apart, and his wife won custody of their only son.

The 1988 stock market crash sent him into a further dive, as his lucrative work dried up because clients sought cheaper methods for their ad campaigns.  A bankruptcy, a second failed marriage and criticism from his peers also exacerbated his problems.

Craig’s work was still improving, but it was also creating difficulties.  “I got accused of taking a photograph and touching it up,” he says, shaking his head.  “People didn’t know how anybody could make something like that:  flat and photographic, with no brush strokes.  It hurt me because they thought I was cheating.” 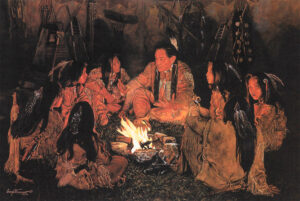 Craig says he finally just reached a point where he was sick of being in awe of other illustrators.  He decided to start over and vowed to paint what he wanted to paint:  rustic stuff.  During this reassessment, he gave in to his inner voice and headed west.  He also threw away his markers, pencils and acrylics.

“I’ll just pick up oil paints and start painting,” he remembers, laughing.  “How hard can they be?  Well, they were the easiest of all.” 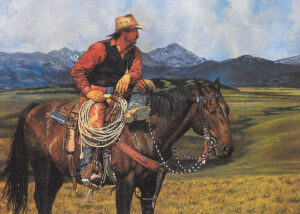 As much as he continues his attempt to get away from that photographic look, his work still has that appearance.  Is it his attention to detail that makes it so picture perfect?

“That, and the richness of the darks and how they play against the lights,” he says.  “I want all the tones that I can get into a painting.  A lot of artists don’t do that.  So, my paintings look more like photographs because photographs are very dark.  I don’t paint with black, but my lights are so light that the darks look black.  I like a gusty painting,” Craig adds with a smile. 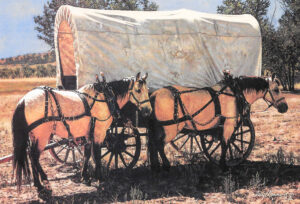 He must be doing something right; in six short years, he’s already selling directly to his own collectors.  Colorado corporate collections include Pueblo Bank and Trust and The Anschutz Collection.  And he’s one of three artists commissioned to provide a piece that hangs in the newly opened Park Meadows shopping center in south Denver.  Other artists are even buying his works.  “You just have to hope that by pleasing yourself with a painting, somebody else is going to be pretty excited about it too,” Craig says. 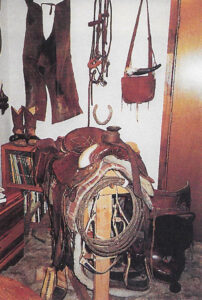 Craig often uses his collection of Western memorabilia as a reference when he paints.

His attention to detail is due in large part to the extensive research he does in Western history.  Not all of his information comes from reading, although he has studied plenty about the history and lifestyles of the 1800s.  He even lived the part by participating in club meetings where artists, historians, writers and anyone else interested in the time period reenact those rugged times. 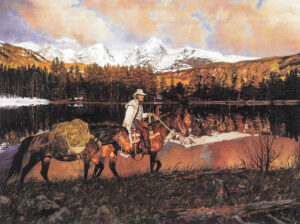 For example, his latest work, “Travelin’ God’s Country,” has a pack horse in it.  Diamond hitches were used in those days, and to give an accurate depiction, he learned how to tie one.  He also had to know what kind of saddle and rifle were used in that time period.  And don’t take the grass in the background for granted—it’s one of the toughest things this perfectionist ever taught himself to do.

“Anytime I need to learn something that I feel weak in, I do a painting where there’s nothing but that in it, like just a ton of grass.  I keep going over it until it’s passable.  It ain’t easy.” 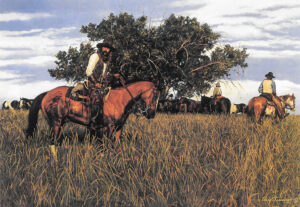 “Under the Cottonwood” was captured just as it happened:  herding horses under a tree. “I fell in love with that cowboy,” Craig says, thinking back.  “He’s one of those 1800 guys.  He makes all his own stuff and he trained his horse.  I plan to do a lot of paintings of him.”

“Painted and Proud” and “Crossing the Platte” were originally shot on Phillip Anschutz’s ranch near Greeley, Colorado.  Craig has done three commissioned paintings for him.  The south Platte River runs through the grounds, which were traveled by the Sioux.

The storyteller in “Buffalo Tales” was doing voice-overs in a recording studio when Craig met him.  After working together briefly, Craig asked him to pose.

“This was Mr. Anschutz’s number-one painting,” Craig says.  “There was not a tremendous amount of research, but I had to go out and get the right kind of models and the right situation.  Just preparing the painting took a while.”

It was an immediate hit.  Twenty people in the Anschutz offices alone bought prints after seeing the original. 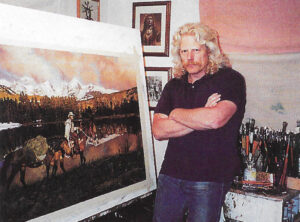 Craig Tennant with “Travelin’ God’s Country” in his studio.

Craig Tennant feels he’s nowhere near his limits.  His works include The Platte River Collection, historical paintings of people who used the area during migrations west; famous ranches in the region; and Native American storytellers.  And he has many more ideas in his head.

Craig attributes much of his success and guidance to the religious beliefs he has embraced over the past eight years.

“I’d always heard ‘Let go and let God.’  So I gave everything up.  I stopped controlling myself.”

Life in the West is coming together better than Craig could ever have hoped, both on and off the canvas.  He has a wonderful wife who he calls Saint Cheryl, a home and studio in the mountains west of Denver, and enough mountains, streams and wildlife to provide inspiration for a lifetime of painting…picture perfect painting!