SEND IN THE CLOWNS 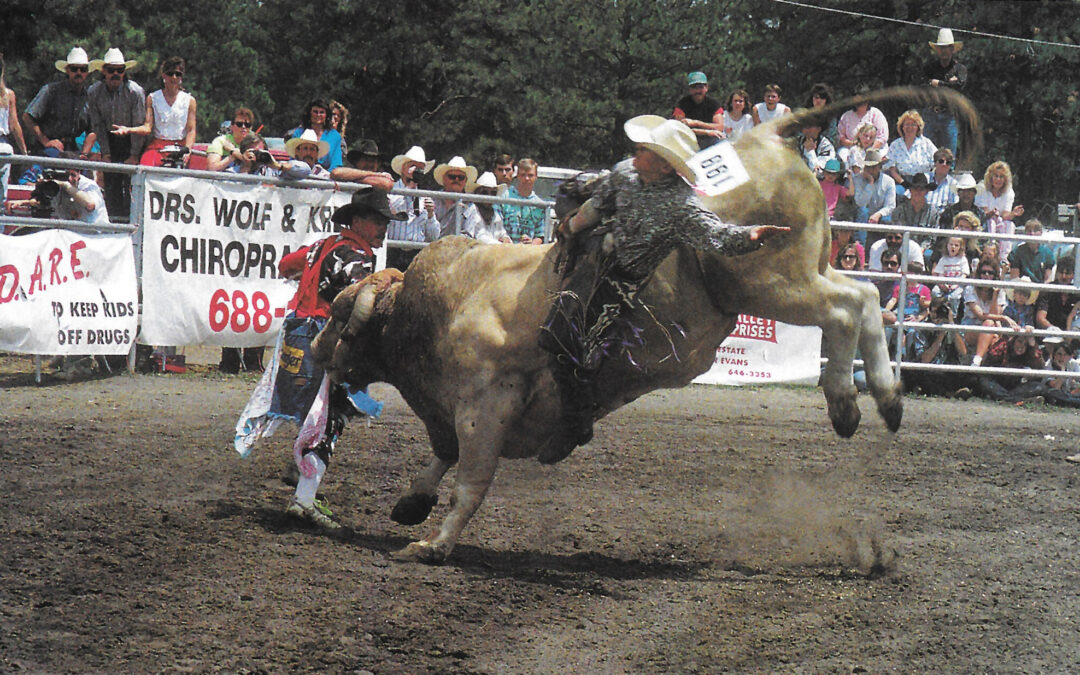 It’s the most dangerous “funny job” in America—fight bulls, save cowboys, make the crowd laugh.  It’s the job description of a rodeo clown, known more professionally as a bull-fighter, a breed unto itself. 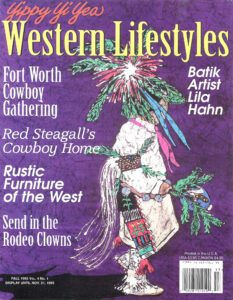 Take Ted Kimzey, Rex Dunn, Larry Deges or Bryan Alexander, four of the many who make up the ranks of the professional bullfighter.  Each is at a different point in their careers, but all voice a passion for their jobs.

The early days of rodeo in the late 1800s consisted of ranch-originated events.  Clowns hadn’t come into being yet because steers were ridden back then, and it was the cowboys who took turns taking care of each other.  When bulls entered the picture, protection became a vital part of the sport.   Thus, the rodeo clown came to be.

The most obvious aspect of the job is that of bullfighter.  This is the clown seen in the arena the entire time of the riding event.  His job ranges from inducing a lazy bull to buck better, to saving the cowboys when they fall off by capturing the animal’s attention and providing comedy between each ride or event.

Bryan Alexander, 28, of Larkspur, Colorado, in the above main photo giving assistance to a rider, grew up in the Little Britches Rodeo in Pagosa Springs.  He first rode bucking horses, and then moved to bulls.  In 1990, he started fighting them, self-taught.  A year later he attended the Championship Rodeo School in Phoenix and says it made all the difference.  His instructor was Rob Smets, a champion bullfighter himself.

A lack of makeup distinguishes Bryan Alexander from most rodeo clowns. Photo by James A. Hughes

“I always knew what the bull was thinking,” Bryan says.  “But I didn’t know how to get in and out without getting run over.  He taught me the moves.”

What he likes best about the job is making the bulls buck.

“I like to make the contractor’s bull buck better than they have been, and it also helps the cowboy.  The cowboy isn’t gonna score anything if the bull doesn’t buck.”

Because of his background, he tries to work Little Britches Rodeos whenever he can; and unlike the typical rodeo clown, he doesn’t wear makeup.  He feels he does a better job when he doesn’t; and yes, he says he has caught some grief over it. 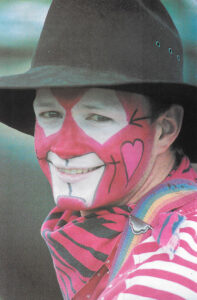 Larry Deges designed his makeup to be symbolic of his past. Photo by James A Hughes

As a kid, Larry Deges of Grainfield, Kansas, helped a contractor put on rodeos, but it was the clown who always held his attention.  He was in college on a team-roping scholarship when he got his chance to go to Rex Dunn’s Coyote Hills Rodeo School of Champions to learn bullfighting. 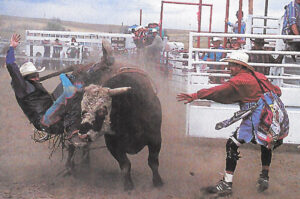 “I like to save cowboys,” Deges says in a soft voice.  “Some days you leave the arena and you know you’ve done a good job.  Nobody got hurt and nothin’ goes said and you have an empty spot in your heart wonderin’ how you did and just one person, just one bullrider saying ‘Hey, thanks.  You did a hell of a job,’ is worth more money than you can pay me.”

Deges’ makeup includes diamonds around the eyes because the clown who got him started wore those.  The hearts on his cheeks represent love for his job.  And he puts a cross in the corners of his grin “because I thank the Lord every day for what I do.” 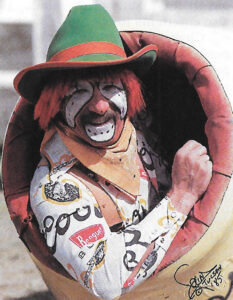 Ted Kimzey plays the clown at bullfights all over the world. Photo by James A. Hughes

Ted Kimzey likes to save cowboys too, but he does it from a barrel.  A barrellman provides an island of safety for the bullfighting clown and the bullrider when they’re stuck out in the middle of the arena.  He also entertains the crowd.

Clowning is certainly part of his personality.  When asked how he got his start, he laughs and says, “I was too lazy to work and too scared to steal!”

More seriously, he says he found he had the ability to fight bulls at a local open or amateur rodeo that couldn’t afford to hire a clown.  His friends would get into trouble, and he’d jump out to help. 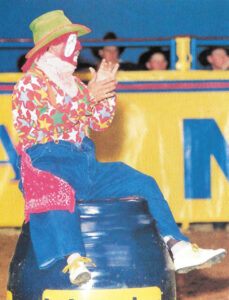 Ted Kimzey works the barrel, which provides an island of safety. Photo by Dudley Barker

Soon, he was not only competing in the rodeo events, but was working as clown, too.  It was a way to have money coming in if his riding didn’t pay off.  His first contracts were working the barrel.  Then he moved over to bullfighting.  In the last few years, he’s gone back to the barrel.

“The ripe old age of passing forty and having my second child had a lot to do with me retiring my cleats,” he says laughing again.  “I don’t get run over near as much!”

His peers in the PRCA apparently approve of the job he’s doing.  They chose him to be the barrelman for the last 10 consecutives National Finals Rodeo competitions in Las Vegas.  No one else has such a record.

Kimzey says the best thing about his job is the friends he’s made coast to coast and the traveling it’s enabled him to do, including a trip to Munich, Germany, where he worked a bullfight exhibition.

The travel is also the worst part of it.  His family goes with him as often as possible.

“Pickups get small,” he says.  “Trailers get small.  But at the same time, having them with you is definitely better than leaving them home.”

Home is a ranch near Strong City, Oklahoma.  When he’s not clowning, he ranches.  He wouldn’t want to raise a family any other way.

“Rodeo people are very close-knit,” he says.  There’s camaraderie there that’s second to no other sport.  And wives and kids; they fit right into that.”

Fitting in is what Rex Dunn teaches his wanna-be-clowns in his bullfighting school.  The school runs three days, twice a year, usually in April and November.  Dunnn holds it in the arena at his ranch near Hastings, Oklahoma.

His curriculum includes basic bullfighting, which is how to work bulls and get around them.  He teaches procedures and maneuvers and “other than that, the bulls are the real teachers and we have a lot of ‘em.”

That doesn’t mean he hasn’t seen his share of the action.  His clowning career started in 1970 and culminated last spring when he worked his last rodeo in Vernon, Texas, at the Santa Rosa Roundup.  It’s a rodeo he once worked full time, and its 50th anniversary was a perfect way to celebrate his retirement.

His style in the arena earned him the title of “Mr. Smooth.”  It was his ability to get in the pocket right next to a bull’s shoulder and literally walk around with him that earned him that moniker.

Dunn’s career has made him one of the top bullfights in the industry.  Among his many titles is PRCA’s Clown of the Year.

“We probably worked more rodeos together as a team than anybody going nowadays,” Dunn says of his relationship with Ted Kimzey.

“Ted is probably one of my always favorite clowns/bullfighters/barrelmen to work with because he always knew what move I was going to make before I made it.  He works as a barrelman, but very few people know that Ted could step out of that barrel and fight a bull just about as good as anybody.” 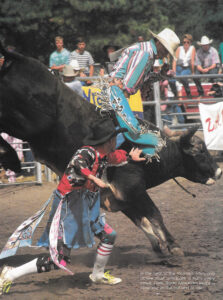 In the heat of the moment, riders and clowns must anticipate a bull’s every move. Here, Bryan Alexander keeps a close eye on the bull and its rider. Photo by James A. Hughes

He calls former student Larry Deges “one of them naturals” and says he’s probably one of the top young outstanding bullfighters coming up right now.

“You can’t teach somebody how to do this.  They’ve got to have it in ‘em,” Dunn says.

“I did get the good fortune of being around Larry when he was young in the business, and now he’s tops in his end of the business.  I’d highly recommend him to any rodeo going.”

It’s worth remembering that behind those amusing trademarks like Larry Deges’ red face or Ted Kimsey’s green hat and knee-length bloomers, there’s some serious funny business going on and the bullrider’s not the only professional in the arena.