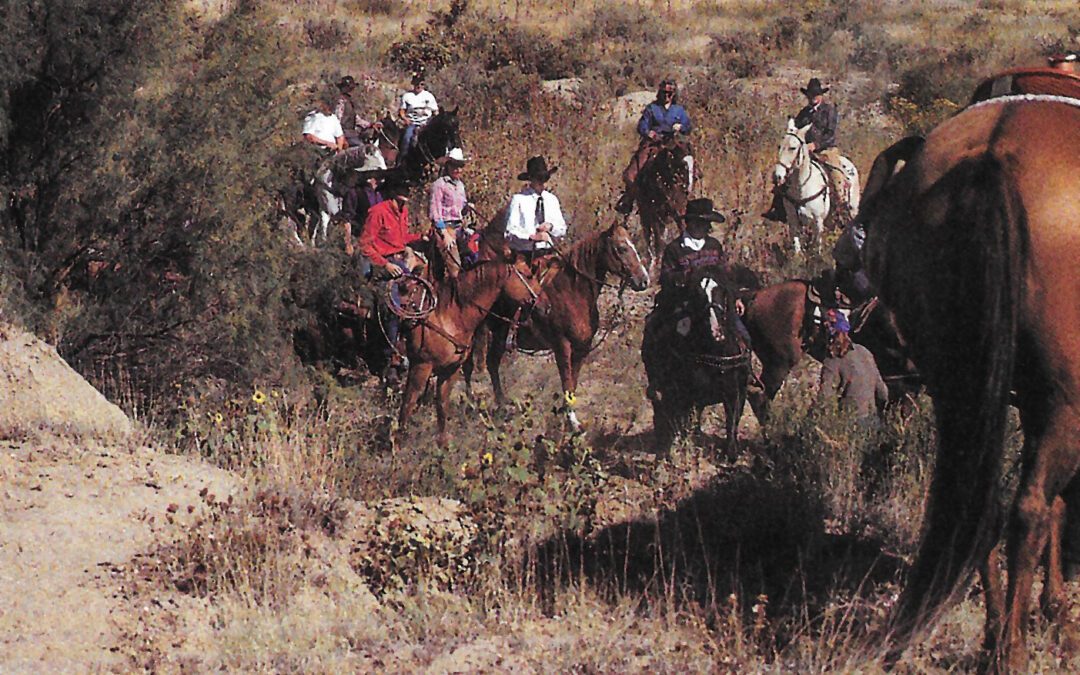 Snorting horses tug at the reins.  They kick up dust as they paw the ground.  Cowboy hats are pulled down tighter over foreheads.  The trail master finally raises his hand, and with the snap of his wrist, he shouts, “Move ‘em out!”  The ride begins.

A scene from a favorite Western, with rodeo champion Larry Mahan in the role of trail boss?  You might think so.

Actually, it’s the annual “Ride with the Stars,” a celebrity trail ride benefiting the North American Riding for the Handicapped Association.  NARHA is a nonprofit equestrian organization serving individuals with disabilities.  It promotes the rehabilitation of individuals with physical, psychological and learning disabilities through equine-facilitated activities.

TV and rodeo stars, kids and adults with disabilities, walkers accompanying them, and many other wanting to help raise funds, take part in the event.  It’s held on the 8,000-acre T-Cross Ranch belonging to Bob Norris, former Marlboro Man.  His south-central Colorado ranch has spectacular views west to the Rockies and east across the open range.  An entire day’s worth of activities, such as rodeo events, auctions, steak fry and dance, makes it that much better. 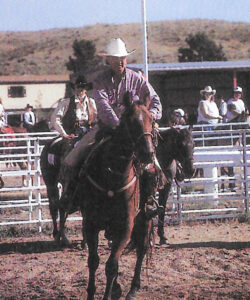 Six-time world champion cowboy Larry Mahan was the trail boss for the “Ride with the Stars.” Photo by James A Hughes

In the past, Jill St. John and husband Robert Wagner, actor Barry Corbin and country singer Lynn Anderson have saddled up for the event.  Not only do they give their time for this fundraising venture, but many of them also donate items for its two auctions.

What’s special, though, is the way these celebrities interact with the riders.  Beforehand, they talk with the disabled riders and their family members and pose for pictures.  During the 10-mile journey, they move up and down the line visiting.  Their down-to-earth friendliness is as refreshing as the clean air.

These stars are passionate about their involvement.  Alex Cord had polio when he was 11 years old.  With his rugged good looks and the cowboy roles he’s played, it’s hard to imagine him in an iron lung.

“I watched a lotta kids die around me in the hospital,” he says in almost a whisper.  “I was always a horse lover and the thing that kept me going was dreaming of the horses I would ride when I got out.

Cord has been involved with NARHA, or organizations like it, for 18 years.  He says it’s his way of giving back.  What he’s seen during that time, he calls miracles.

“I remember a mother bringing her 11-year-old boy to the place one day,” he says matter-of-factly.  “He was in braces from his hips to his toes.  His head hung over to the side.  I forget what disease he had.  But this kid, with a wire frame around him, had never been near a horse.  We put him up next to that horse and he put his arms around it and he smiled, which I thought was fairly normal.  His mother came apart.”

He pauses, his eyes watering.

“When we asked her why,” he continues slowly, “she said it was because she had never seen him smile.  Eleven years old and he’d never smiled.  When I saw that…” his voice trails off. 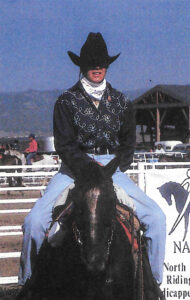 Denver meteorologist Pam Daale also has personal reason for promoting such an event.  A 1980 riding accident at age 16 left her paralyzed from the waist down.  It hasn’t slowed her down, though.  She’s the prime-time TV weatherperson for Denver’s CBS affilities.

“I grew up with horses,” she says, smiling warmly, “so an organization that gives the opportunity to ride to people who have disabilities is just something that is very near to my heart.”

While 225 participants begin the trail ride, many disabled riders and their sidewalkers cut the venture short.  Hardly anyone is at the arena to greet them.  But the kids wave anyway, as if it were their very own parade. 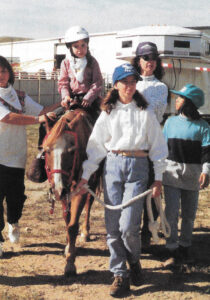 Janna Freking (on horse) was one of the children who had a great time riding horses and meeting celebrities at the “Ride with the Stars.” Photo by Karen Land Cranford

Jodel Freking’s daughter, Janna, rides at the Liberty Riding Center near Colorado Springs. (NARHA has more than 450 member operating centers in the United States and Canada.)

The 8-year-old has yet to be diagnosed with a specific malady, but she has severe learning disabilities and some physical handicaps that started between 18 and 24 months of age.  Regaining equilibrium and eliminating toe-walking are two of the benefits resulting from the program, according to her mother.  But that’s not all.

“It’s something we as a family have enjoyed doing together,” Jodel says, watching her daughter sleep after the exhausting morning.  “She’s doing something that everybody can do.”

Tori Ayares agrees.  Her 14-year-old son, John, has autism and has ridden for seven years with HAT, Horseback Assisted Therapy, in Denver.  In her mind there’s no question it’s been good for him.

“Horses walk like people do,” she says.  “They get a lot of good sensory stuff from this, and also there’s the confidence factor.  He rides real well, and he can do a lot of advanced things all by himself.  When he first started, he could barely get up there.”

His mother asks him if it’s fun.  A huge smile appears. 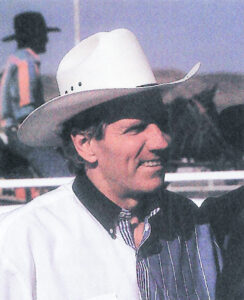 Actor Gary Collins didn’t do badly in the pinning event.  His wife, actress and former Miss America Mary Ann Mobley, arranged this function and then was called away to a job.

“She’s crazy with pinning and all of that stuff,” Gary says laughingly.  “She grew up breaking horses for her daddy and then she got into the pinning and really enjoys it.  So, I’m just up here doing my little bit.” 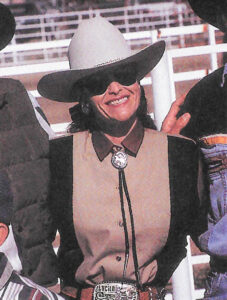 Veterinarian Kate Gentry thinks enough of the program to have been a part of all three years’ events.  The television work she does in Las Vegas led her to a story on riding for the handicapped.

“I was so incredibly touched by what was going on that I personally became involved in our local riding chapter,” she says.

We have people who are two years old and sixty-eight riding, and that’s the thing about therapeutic riding.  It covers no matter how you’ve been challenged whether mentally, physically, age, whatever.”

Chest and vascular surgeon Dr. Louis Wagner of Franklin, Pennsylvania, has his own theory on the medical benefits.

“A horse’s walking action mimics your body action.  So, when you put somebody on a horse, in order to keep their balance, they have to move their trunk, arms, shoulders, head and the rest of their body.  Only a live creature can make happen what is so beneficial.”

Don’t think for a second, however, that just any horse will work in this program.  While horses do come in all shapes and sizes, NARHA officials look for a quiet, spook-proof attitude, pleasant temperament, good manners, smooth gait and physical soundness.  All are put through a series of tests and must pass a probationary period before they’re accepted.

A live auction, music and dancing round out the day’s activities.  According to Bill Scebbi, executive director for NARHA, the organization grossed $46,000 from the event, which is designated for their operating budget.

Founded in 1969, NARHA is headquartered in Denver.  Programs originating from this organization include operating center accreditation and instructor certification to help insure the high quality and safe instruction offered by local operating centers.

Today, more than 23,000 riders with disabilities have benefited from the program thanks to 1,125 instructors, 19,000 volunteers, 585 licensed therapists and 3,600 horses.  Inquiries about therapeutic riding increase monthly as more people become aware of it.

References to the physical and emotional benefits of horseback riding date back to writings in the 1600s.  However, it took Liz Hartel of Denmark winning the silver medal for dressage at the 1952 Helsinki Olympic Games to make medical and equine professionals take notice.  She was paralyzed from polio.

Take away the pretense and the theories.  Forget the psychological speculation and the emotional assumptions.  What is left, on the most basic level, is a connection between a human being and a warm, live animal.  One look at the face of an 11-year-old boy who smiles for the first time tells it all.

Update 8/2021  Bob Norris passed away in 2019.  The ranch in this story was sold but the Tee Cross Ranch operations still exist, much of it in Texas, and the General Manager is now Bob Norris’ son, Bobby Norris.