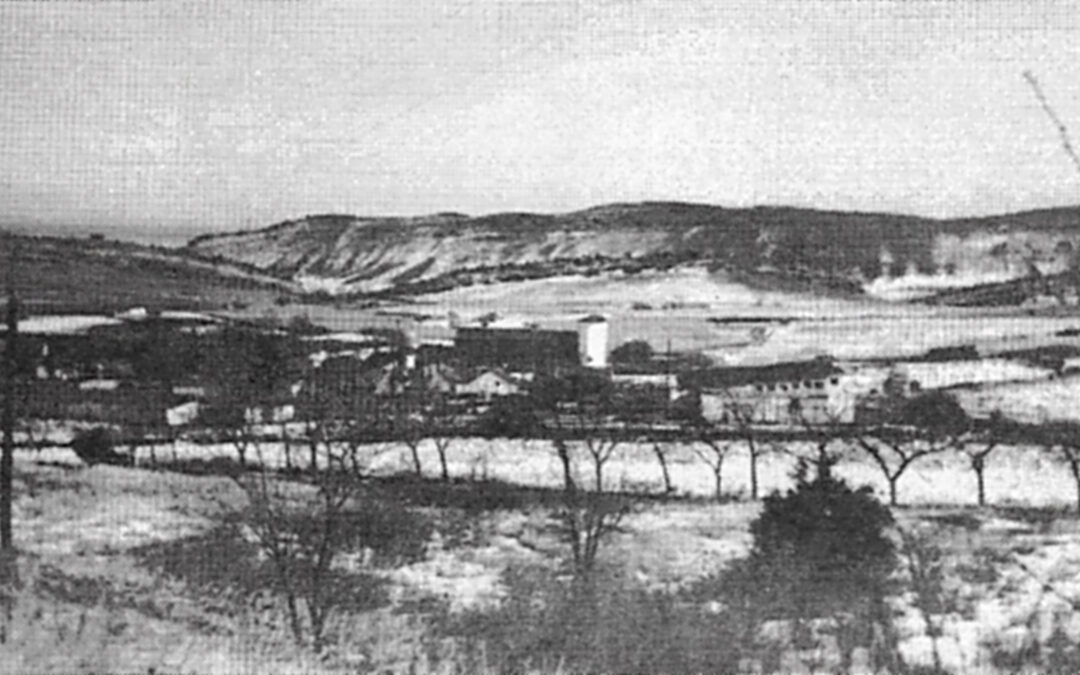 My last article had Arthur Ponsford owning Willow Springs Ranch until 1930.  Over the next ten years, property owners changed several times.  But in 1941 a woman named Grace Carron, a widow from Cleveland, and her nephew, Bill Watkins, bought the place.  Dairy farming was their business.  The Jefferson County “Chain of Title” shows they owned it until the end of 1947.

Willow Springs resident Ron Versaw provided me a copy of a memory book written by Veronica Arington.  Veronica and her husband, Hugh, lived and worked on the property for Mrs. Carron during that time.  Ron’s copy was a “copy of a copy” with some pages missing.  Veronica wrote this booklet in the 70’s and it’s filled with stories of living and working on this ranch.  Ron, however, only had this one copy and didn’t know Veronica or her family.  My research turned up dead ends as well.  I found the Arington’s burial information, but it didn’t show they had children. 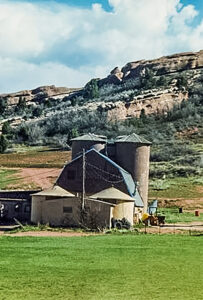 This photo, taken in 1999 by Willow Springs resident Ron Versaw, is the barn Veronica talks about in her booklet.  Before being torn down, it served as the golf course maintenance building until its upkeep became too expensive.  The current maintenance building is on the west side of the course at Willow Springs and Belleview, almost the very same spot as the barn was originally.

Ron’s copy did, however, have Veronica’s name and address in Humboldt, Nebraska handwritten on it.  Since I spent my summers growing up in Nebraska, I knew it was not unusual to keep a property in the family after someone passes away.  I took a chance and sent a letter explaining my purpose for writing an article based on Veronica’s memories.  After a couple weeks, I decided that, too, was a dead end.

As soon as I let it go, I got a call…from Kansas.  Of all things, it was Lila Glotzbach, Veronica’s daughter!  Veronica and her husband have both passed away, but Veronica’s niece now owns the Nebraska property, and she passed my letter on to Lila.  Veronica writes about Lila in her memoir.  In fact, Veronica’s family moved to Willow Springs when Lila was in 5th grade and they stayed 4 years.

What I have done in this two-part series is introduce Veronica’s subjects from her booklet and then I let her words, exactly as she wrote them, explain it!  So, thank you Ron Versaw for bringing this to my attention so we could hear about life in the 40’s at Willow Springs Ranch!  You’ll find that some things never change!

Veronica opens her book with this chapter:  “Anything Can Happen at Willow Springs and It Usually Did.”  Then she describes the overall layout of the ranch as it was in 1941.  She says it was more or less divided into 3 parts.

Veronica says there were 3 gates, and she also has an explanation of how all of those Russian Olive trees got here! 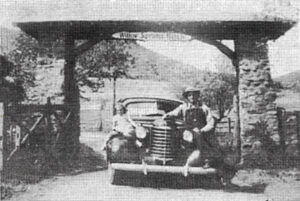 Original gate to the “Big House” with one of the dairy hands and his daughter.

“The first (gate) was on the west and led up to the Big House and the guest houses.  It had stone pillars on each side and a sign in between that read “Willow Springs Ranch”.  Soon after we moved there, they planted a row of Russian Olive trees along the lane to The Big House.  They didn’t prove to be a big success as they grew to be quite scraggly and hard to do anything with.  The second gate led from the road up to the cookhouse and office.  The third led from the road to the milk barn, horse barn and corrals.”

According to Arington, the second or working part of the ranch had many buildings spread out over quite a territory.  Some of them were originally turkey houses that were made into apartments.  There was a large mill where they ground and mixed feed for the cattle and horses.  There were sheds used for garages and sheds used for the workhorses and calves.  She says these sheds went east almost to the milk barn.

“The milk barn had been remodeled from a horse barn into a milking facility.  Stanchions had been installed and a cooling room added, with refrigeration, in a tank to keep the milk cold until it could be hauled daily into The Silver State Dairy in Denver.  Across the lane north of the barn was a round building that was called the milk house.  All the milking equipment was washed and sterilized and stored there.”

As you can tell, this was a real working dairy ranch. And while Mrs. Carron and her nephew were there, they did a lot of remodeling and added a few things too.

THE RODEO
According to Veronica, the Wroton Arena that we know of today in Willowbrook, was originally built by Grace Carron.

“When they were remodeling the buildings on the ranch, Mrs. Carron and Bill decided to build a rodeo setup.  It was south and east of the milk barn and we could reach it by foot or horseback by going across the pasture.  To reach it by car one had to go south from the road, by the cave and then back west. “

“They built a regulation size corral.  There were box seats on the north side and bleachers on the south.  The catch pens were on the west end and on the east end there was a tall stand for the judges and announcers.  The entry chutes were beneath this stand and the holding pens were to the east of them. “

“The “Foot Printers” from Denver, I believe it was a law enforcement group, put on a Rodeo each year just after the Cheyenne Rodeo and many of the riders from Cheyenne came to ride in the Foot Printers Rodeo.  The proceeds from the two or three nights, was given as a donation to a Children’s Hospital.” 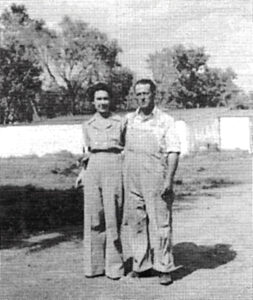 “Before the Rodeos, everyone on the ranch, enjoyed watching the riders try out the horses and the other stock to see which were the best buckers.  Hugh (Veronica’s husband) hated the Brahma Bulls and always went home when that event came on.  We had a couple of incidents with the bulls that were or could have been very serious.  One was when a rider was bucked off a bull and the bull turned on him and gored him before he had a chance to get away or the clowns could help him.  He was gored in the liver and did recover after a long siege in the hospital.  The other riders really rallied to help.”

THE BUNKHOUSE
The bunkhouse had metal cots with mattresses, pillows and blankets for the ranch hands.  Veronica said they always smelled like they needed airing out.  She says she really tried to keep the bedding clean.

“One day I asked if they had found any bed bugs, one had been found in another place.  No one had seen any and Dave Braun said “I couldn’t sleep if there were any bed bugs in my bed”.  The next Saturday I was changing his sheets and his bed was crawling with bugs.  He just couldn’t believe it.”

RATTLESNAKES
Rattlesnakes will always be a part of Willow Springs.

“North of the Mill, a little farther down the hill, there was a huge rock.  The kids loved to play on it.  They did have to watch for rattlesnakes though.  One day they started down and a big rattlesnake was at the foot sunning himself.  After lots of screaming, someone went and killed it so they could get down. “

And you watched for snakes if you worked with the hay!

“One time when they were stacking bunched hay, Dick (Veronica’s son/Lila’s brother) raised a forkful and as he threw it he heard a rattler.  He yelled “watch out there’s a rattler in there.”  The man on the stack came off in a hurry.  They had to unload the whole load to find the snake.  He had gone right to the bottom of the wagon.”

“Another time Hugh went to get off the tractor to shut a gate, as he went to jump he looked down and there was a big rattler coiled right there where he would have landed.  He really stretched out and made that a long jump.”

PART II – NEXT MONTH
In the January issue of Red Rocks Views, you’ll find Part 2 and learn about the horses kept at Willow Springs Ranch and their part in helping soldiers who fought in World War II, how Veronica tried to raise a baby deer on the ranch, and about the kids that would work on the ranch during the summers.

Just as Veronica said, “Anything Could Happen at Willow Springs and it Generally Did.”