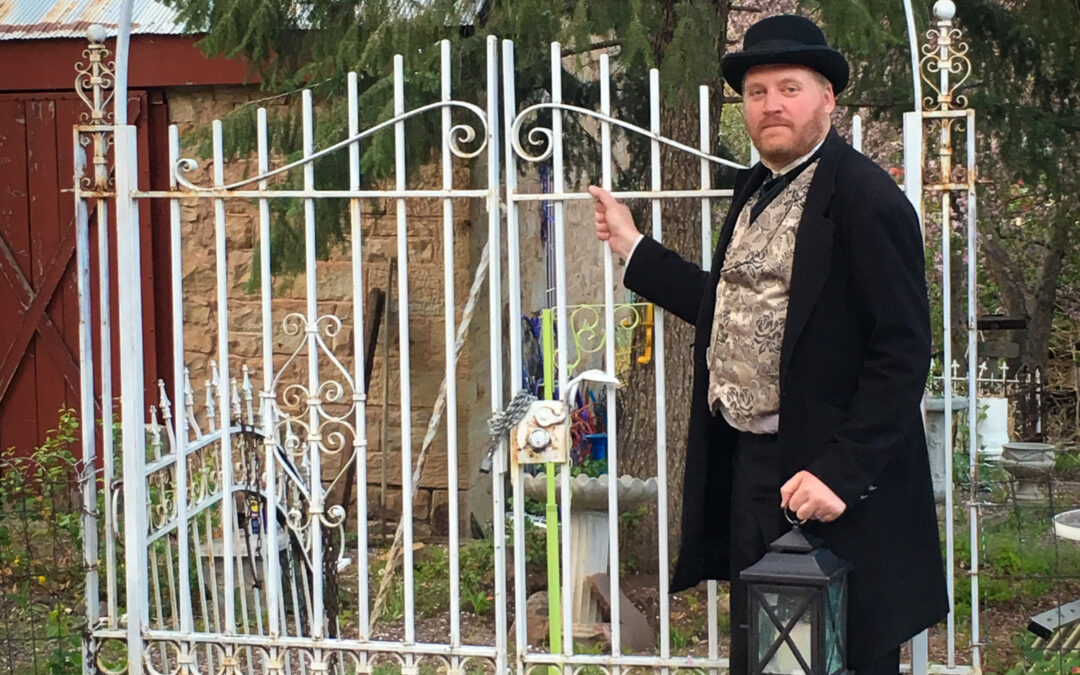 Ghosts are everywhere these days, especially in the stores.  Each day of the year, though, ghosts apparently exist in our downtown area.  In fact, with only 430 residents in incorporated Morrison, ghost story teller Joel Chirhart believes it’s the most haunted city in the country, per capita.

I’m not surprised.  After taking his Ghost and Legends Tour of Morrison on a Friday the 13th, I found there weren’t many buildings he didn’t talk about.  The tour is fun and spooky, but also filled with lots of historical information.

Joel purchased the ghost tour business ten years ago from Dee Chandler who originally conducted the walks.  She also co-wrote the hard-to-come-by booklet, The Ghosts of Morrison Colorado.   Joel says he got many of his stories from Dee and some are legends.  But he’s also talked to employees of several restaurants and bars who say they have seen things that make them believers!

The first stop on Joel’s walk is the Horton House, located on Canon Street just off Bear Creek, Morrison’s west/east main street.  This Bed and Breakfast has been vacant for a couple years due to a fire and is now up for sale.  It was home to three generations of Hortons.  Over the years, B&B owner Lila Horton experienced both her mother and grandmother passing away in the house.  However, a woman who lived there before the Hortons had numerous bouts of depression.  Her brother’s death sent her over the edge.  Joel says she hung herself in the carriage house.  He believes she’s the one who haunted this location because the image of a woman would occasionally appear in mirrors, with no one there when you turn around.

Lila never stayed in the yard after dusk due to the times she would feel breath on the back of her neck.  According to Joel, she also said the door to the root cellar would never stay closed, and steps could be heard on the stairs—stairs that hadn’t existed in a long time.  Their dog would bark incessantly until the footsteps stopped.

Joel spent the night there one Halloween with Peter Boyles and his radio-show team.  He found a windmill in the yard that night and asked if there was a spirit present, and would it make the windmill spin?  It did!  He asked it to turn the other direction.  It slowed down, stopped, and started going the other way!

Hauntings occur in Morrison’s restaurants too. 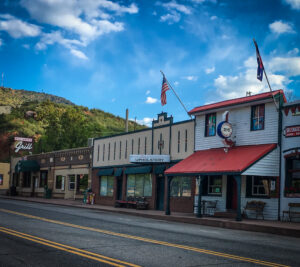 The Red Rocks Grill had a manager killed in a motorcycle accident just two miles from the establishment.  They locked up her office afterwards, but employees would hear papers rustling and voices in there.  Nothing was ever disturbed when they checked.

She also had a peculiar way of wrapping the silverware and always wanted the place cleaned up before leaving for the night.  After a party one evening, employees left the mess for the next morning.  The next day they arrived to find everything straightened up, and the silverware wrapped the way she always did it! 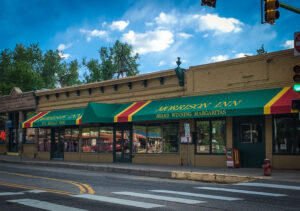 A bartender at The Morrison Inn didn’t believe the stories she’d heard, so one night as she was closing she asked the ghost to prove its presence.  The TV’s came on.  Still not believing, she asked another night for proof.  When she saw the apparition of a little woman in tattered clothes, she never asked again!

Rigatoni’s apparently has a ghost taking things out on male employees, and Café Prague and Holiday Bar have their share of stories too.  Joel’s details will give you goosebumps! 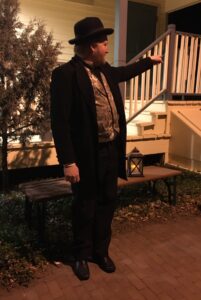 Other buildings also experience unexplained events.  Lacey Gate Antiques was a popular business on Stone Street before it became Flights Wine Café and now Red Rocks Beer Garden.  It was originally home to the Newland family.  Mr. Newland smoked and sold cigars.  Mrs. Newland boarded railroad workers and did a lot of baking.  Get ready to smell cigars or baked goods in that location.

The owners of the store next to Lacey Gate Antiques often blamed their paranormal activity on the cat from Lacey Gate.  Except it would be quite a feat for him to come in after closing, select shoes, and then place them next to the mannequin to match its outfit!

The Town Hall building isn’t exempt either.  There’s enough going on in there, that the cleaning crew doesn’t like coming in by themselves anymore.

The Cliff House Lodge has so many sad stories attached to it, it would be surprising if they didn’t have spirits.   This was the original home of George Morrison, our city’s namesake.   George, a cigar lover, died in the home and it is said that cigar smoke can be seen in the 2nd floor window.

The next owner had a wife who had been mentally institutionalized several times and eventually died in the house.  What happened to her husband, as well as the story about the WWI vet who once lived there, will give you chills.

Many people in the area died over the years in tragic ways.  The major floods of the 1800’s and 1930’s was one cause.  And I’m sure there are stories we don’t even know about.  So, it shouldn’t surprise us energy remains here.

If you’ve watched any ghost hunting show on TV, you’ve heard them talk about residual hauntings.  The premise is that the building with ‘paranormal activity’ sits over a quartz deposit that has captured energy causing some of the events in the building to occur over-and-over again like a broken record.  There’s no intelligence to it, it doesn’t interact in the way it did with Joel and the windmill at the Horton House and it’s the same repetitive action.  It’s just caught in the quartz. Couldn’t that happen here, too?

We know quartz is an amplifier and conductor of energy.  Look how much it’s used in today’s technology from watches, to computers, to lasers.  How much quartz sits under or around the buildings in Morrison?

Carol Quinn of Lakewood, proprietor of Heaven In Earth: A Crystal Boutique, says our foothills and mountains contain lots of quartz deposits.  And if it’s not quartz, it’s granite which she says is very often laced with quartz in this area.  So, the energy of sudden, tragic deaths could easily be captured within quartz AND granite. 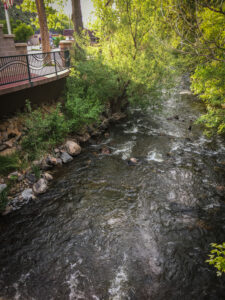 Carol also reminded me how powerful the water element is in this scenario.  It, too, is a great conductor and picks up energy from all the properties it passes, especially if there’s quartz involved.  As a conductor, it can amplify the energy that has been laying in the soil from some event…think mining accidents or Indian skirmishes.  So, start with the water of Bear Creek picking up bits and pieces of energy from all the properties it’s passed further west.  Add the sediment it picks up along the way, bits of quartz and granite.  Mix that with a town surrounded by quartz, granite and tragic stories, and you have the perfect recipe for paranormal activity!  I don’t know how you’d prove it, but it’s interesting to think about.

This time of year conjures up spooky haunts everywhere.  Joel’s tour has plenty of that, but also includes fascinating historical facts about Morrison.  He tells about John Brisbane Walker who moved here in 1875 and his impact on the area.  You’ll hear about Judge Babcock’s courtroom known for its swift justice, and stories about the Hanging Tree up behind that courtroom.  You’ll learn about the jailhouse, and the police chief’s wife who was a bootlegger.  We even have our own version of the Hatchet Lady!

Joel was a great host.  His “Ghosts and Legends Tour” of Morrison is about an hour and a half long.  He also has a 2 hour “Murder, Mayhem and Madness Tour” of Golden.  You can find out more about dates and booking his upcoming tours during this bewitching season at www.coloradohauntedhistory.com.

Oddly enough, as he summed up our event at the end of the evening, a black cat crossed the street to the side of us!  It didn’t actually cross our path, but how’d he do that? It certainly was an interesting way to end our Friday the 13th Ghost Tour of Morrison!