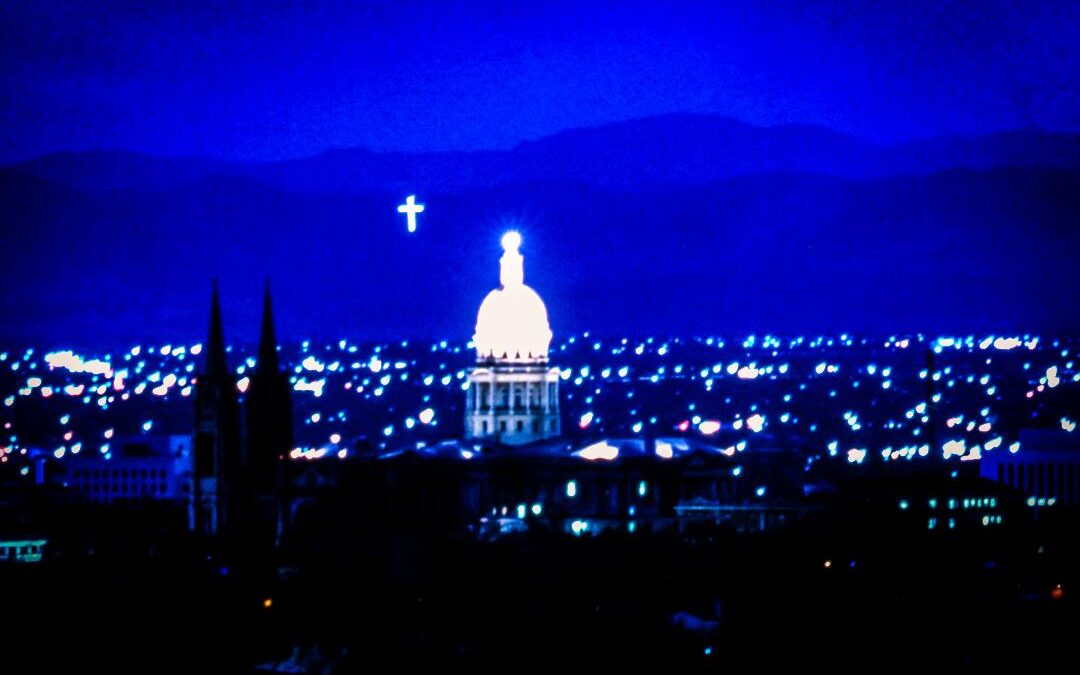 Part 1 of this story covered the history of how the Mount Lindo Cross came to be built on the side of a mountain in the southern foothills of Denver.  Here we find out how complicated that was and meet the man who built it.   You’ll also learn about the attempt to take it down! 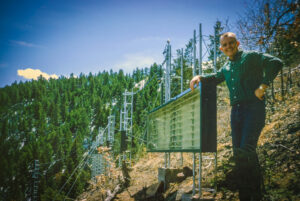 Dwight Johnson, V.P and lighting engineer for Sturgeon Electric Company, and designer of the cross stands by one of the fixture boxes during construction in 1964.

The design for the cross was created by Dwight Johnson, V.P. and lighting engineer for Sturgeon Electric Company.  Johnson, who still lives in Colorado, says it took two months of mathematical calculations to find the best placement for it to be seen across the Denver area, as well as determining what lighting could accomplish this kind of visibility.  Francis Van Derbur, the man commissioning the cross to mark his father’s grave, figured it would be 150 feet tall.  Johnson’s scale model for 20 miles of visibility showed a minimum of 265 feet in height.  And by cutting sections in the scale model to simulate a series of illuminated boxes spaced some distance apart, the light proved to run together when viewed at a distance creating an optical illusion of a continuous line of light.  This would allow them to build a larger cross AND increase the viewing distance.

Johnson says the light source for this structure would have to operate at sub-zero temperatures AND warm summer evenings, be low maintenance, have a long life, and be economical.  Each fixture needed to clear the snow in winter and the structure itself must  withstand 125 mile per hour winds. 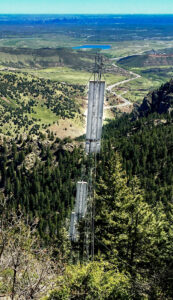 One steel tower was sufficient to hold each of the 12 vertical stations, but two support towers were required for each of the eight horizontal fixtures.

Johnson settled on 20 light fixture boxes attached to the mountain.  The stroke or vertical section has 12 fixture boxes. 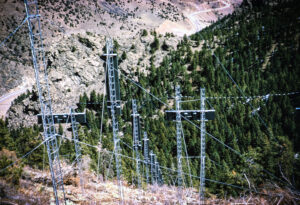 The crossarm or horizontal sections have 8.  After considering the variations of elevation and angle of the mountainside, he determined that if they built it right on the mountain, they would have a cross nearly 400 feet tall by using 602 feet of mountain slope.

After a year of construction, the 393-foot-tall cross was first illuminated Easter night of 1964.  The crossarms span 254 feet across the side of the mountain and it can easily be seen 80 miles away to the east.

Ultimately, the work paid off.  With its 15,000 watts of sign lighting, Dwight Johnson took first place in the International Lighting Competition in 1965 in New York City.

Keeping this structure lit has not been easy.  According to John Chalupa, former General Manager for Olinger, they had to use windmills during the energy crisis of the 1980’s to generate its electricity.  In 2014, the cross suffered lightning strikes that took it out of commission. And the local wildlife takes its toll with wire chewing. Management gets the cross back up as quickly as possible through Gordon Signs. It is lit from dusk until dawn, and it operates on a timer.

In 1988, a member of American Atheists tried to have the cross extinguished permanently.  Bill Talley claimed it violated the county’s sign code because the property was zoned “agriculture”, and therefore the cross was larger than what zoning allowed. County attorneys agreed.  Local papers were flooded with letters supporting the cross.  Rallies were held and petitions were signed.  After consideration, Jefferson County Commissioners created zoning for “Landmark Signs”.  If a sign has existed at the same location since 1969, is visible a distance 3 miles or more from a highway, possesses unique physical characteristics and is supported by a petition containing at least 100 signatures of county residents, then it fits the zoning as a “landmark sign”.  The new zoning saved the cross.

Behind that beautiful cross sits a cemetery on top of the mountain.  Shortly after the cross was lit, the land was sold to Olinger Mortuary and they started Mt. Lindo Cemetery. 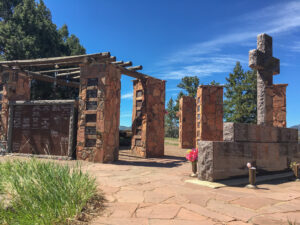 The cemetery has three levels to it.  Garden of the Pines is the first with lawn crypts. The second level is Garden of the Cross and Whispering Pines which hosts a mausoleum, garden crypts and wall crypts.  The third and top level, is the Mount Lindo Nature Garden which has the Mausoleum of the Cross as well as ground crypts situated among winding trails for walking.

Chalupa says in the summer they would do three to five services a week.  Most of those are for scattering cremated remains.  And he says the winding road to the top doesn’t always cooperate…even during the nicer time of the year.  The road is not paved and there are no guard rails.  Olinger officials leave the road graveled in case of icy conditions.  The cemetery is open year-round.  But occasionally, the weather or road condition results in postponing a service. 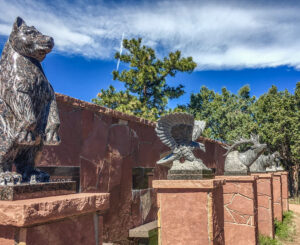 Mt. Lindo Cemetery also features ‘green’ burials which means they don’t sod that cemetery.  Nature re-grasses as it sees fit.  You’ll also find statues dedicated to local wildlife, and panels scattered throughout the grounds with explanations about the area’s trees and leaves. 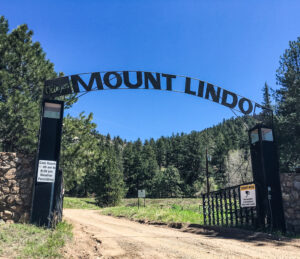 The vistas are beautiful.  The monuments to loved ones are so creative.  And there are lots of wind chimes.  All this tucked behind the beautiful cross.  The Mt. Lindo Cross…on the mountain!
# # #

Mt. Lindo Cemetery can be reached by taking Highway 285 west to the Tiny Town exit…the above entrance sign is a short distance on the left hand side of the road.