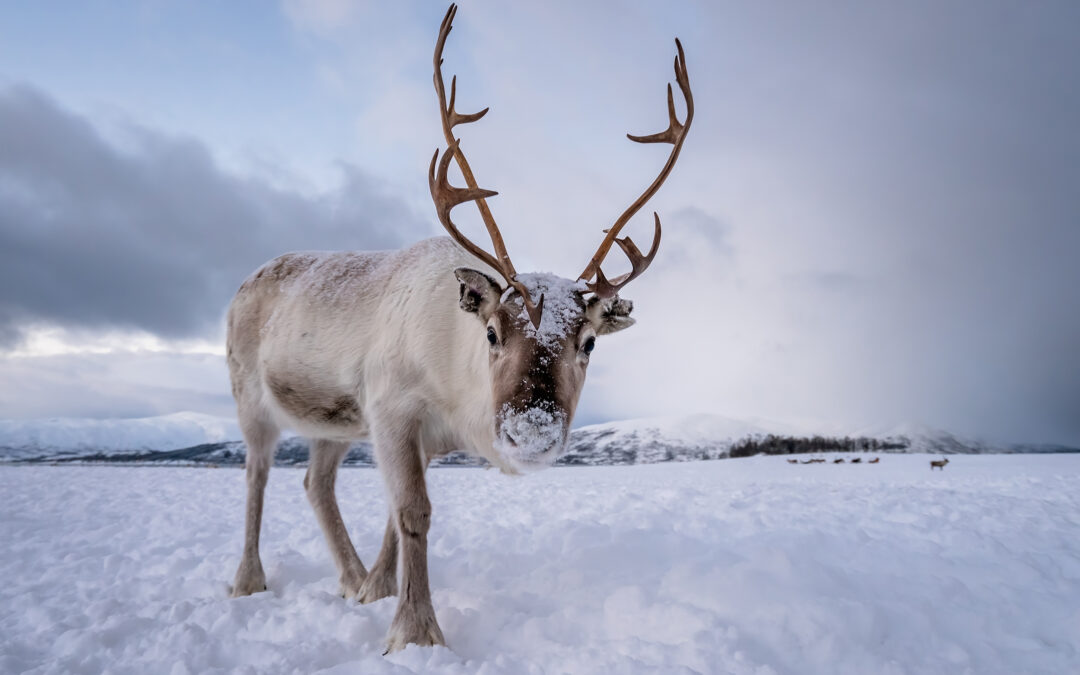 Tucked away in a handsome Colorado valley between Glenwood Springs and Aspen is a spread that even Santa could be proud of.  The Flying Deer Ranch of Snowmass is home to the largest herd of reindeer in the continental United States.  For those who still think reindeer are just a myth (and there are many), 36-year-old Jeff Coates is here to say that he would never go back to ranching any other kind of livestock. 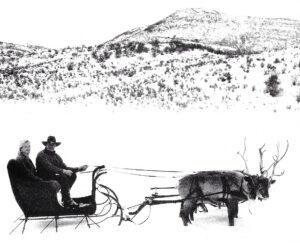 Reindeer are not native to this country.  In fact, it was in 1885 that Charles H. Townsend, a zoologist working with the United States Fish Commission, wrote a report to Congress about the idea of bringing domestic reindeer to Alaska.  The Native Alaskan’s way of life was changing due to the arrival of the white man.  Bringing reindeer from Siberia could be a source of food, clothing, transportation, and employment.  It was a way to help them adapt to the white man’s economy.

According to Alice Postell, in her book Where Did the Reindeer Come From?, the first group of 16 reindeer arrived in Alaska in September 1891, proving to the critics that they could survive being transported across the Bering Sea by ship.  By 1896, there were 218.

The reindeer’s versatility became apparent right away.  Increased activity in gold mining created a demand for freighting supplies to miners and carrying passengers.  The reindeer were soon trained to pull sleds and began to replace the high-priced dog teams.

In 1899, the first reindeer postal route was established across a thousand miles of trackless tundra.  Only during harsh winters did the Native Alaskans use the reindeer for food.  In fact, it was unlawful to kill reindeer because of the concentrated effort to build herds.  But, by 1909, a surplus created the opportunity for exporting reindeer meat, hides and antlers. 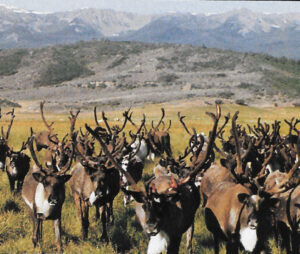 Today, some 30,000 reindeer exist in Alaska, in 18 privately owned herds.  Native Alaskan families are showing more interest in the industry and are learning about reindeer husbandry, disease control and supervision of grazing areas, and working with the agencies of land and wildlife management.

Domestic reindeer are small than wild deer, standing only about 3 feet tall at the shoulder and weighing only half what their untamed counterparts do.  Also surprising is the fact that both male and female reindeer have antlers.  Reindeer and caribou are the only members of the deer family for which this is true.

The 4-foot-tall fences around Coates’ ranch look to be easy marks for jumping, but Jeff says that’s another trait of these domesticated animals.  They’re not jumpers.  That’s what makes them such great pets.

“If it was a 5 foot (fence) and a small room, a good bull or really wild animal could get over it in a confined area and that’s because it wants to…like if you got in with it,” Jeff says. 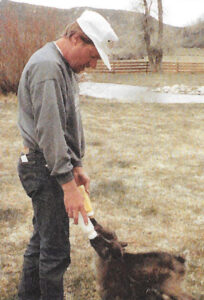 “I’ve got some that are incredibly tame,” he says, looking at the two, week-old babies that followed us all afternoon.  “You leave that door to the house open and they’re inside.”

Large, lateral hooves allow the feet to spread on snow or soft ground with an almost snowshoe effect.  Reindeer also have two large dew claws.  An eerie, crackling sound is heard as the animals make their way across the pasture.  This is caused by the popping of the tendons in their cloven hooves.  And when frightened, a gland between the clefts leaves a warning scent that is instantly recognized by others of the herd. 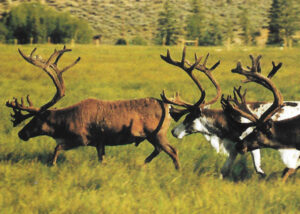 Part of this animal’s rugged beauty is its antlers.  Jeff says you can tell from the base of the rack just how big it will get.  It’s the most beautiful through spring and summer because of the rich, brown velvet covering.  If you’re close enough to touch one in this stage, you’ll notice how warm it is due to the great amount of blood circulating through these prongs.  A mere scratch from a fingernail can make it bleed. 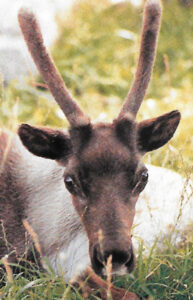 Bulls will begin to shed their antlers about Thanksgiving and this can continue until March.  An antler that gets broken before will then grow back to some extent.

Jeff started his reindeer herd five years ago with two animals.  Before that, he drove teams of llamas through Aspen and gave tourist rides.  He did that commercially for several years, but his experience with the two reindeer was so positive that he began to check the business aspect.

“You couldn’t find any,” Jeff says.  “You couldn’t buy them anywhere.  In the state of Colorado, they’re classified domestic, so they’re some of the only deer you can keep without getting licenses and permits.”

His next step was to find out about shipping them down from Alaska—no easy task.  In Colorado, he had to deal with the state’s veterinarians, the Department of Agriculture and the Division of Wildlife.  In Alaska, he had to go through the Bureau of Indian Affairs, their state’s veterinarians and the Native Alaskans.  Even getting someone to lease out a plane was a challenge because the urine is so damaging to aluminum.

He flew to Alaska and helped with the roundup.  They also found a plane, a DC-6—lined it, sectioned it off and hung cable.  Then came the job of flying a hundred reindeer to the exclusive Aspen airport.

After three years’ worth of trips, Jeff has decided his herd of 200 reindeer is big enough to eliminate that tedious journey.  Now he concentrates on breeding and selling them.

He says he likes what he’s doing and raising reindeer is a lot easier than raising cattle, not to mention more profitable.

“My facilities would be less than someone having to run that many cattle, that’s for sure,” he says, looking around at his corrals and modest-sized barn.  You’d need a lot more ranch, a lot more fencing, more corrals.”

“People cannot make a living anymore with livestock.” he says solemnly.  “The small people can’t compete against the big guys, and they’re looking for alternate livestock because they like to raise animals.”

Jeff says the market for reindeer meat is definitely growing, although the percentage he’s dealt with in that capacity is very small compared to his other sales.  But, he says the meat is good, “better than any elk or deer.” 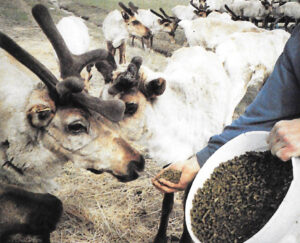 The logistics of raising reindeer are very similar to cattle, with the same kind of inoculations and ear tags being routine.  Jeff uses a custom-mixed feed in place of the reindeer moss that they would normally seek in their natural habitat of Alaska or Siberia.  Author David Petersen, in his book Racks, says the deer can detect the presence of moss under snow several feet dep and paw for it with their hooves.

It’s also natural to wonder about adapting to the warmer climates of the lower 48 states.  Fortunately, it doesn’t get that hot in Jeff’s Colorado location.  And his first reindeer were born and raised in Nebraska.  The man he bought them from also bred them in New Mexico and Southern California.

Jeff says he’s not sure those warmer areas are that good for them, but they do adapt.  “I don’t think they like them (warmer climates) as much, but they definitely will acclimate to it, he says.  “People do have them down in Mississippi, but I don’t think they’re calving very good.” 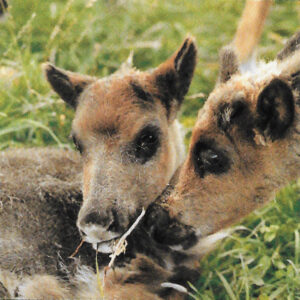 Not only do climates place certain restrictions on reindeer, but each state has its own regulations concerning reindeer.  Some states may classify them as livestock, while others consider them wildlife.  The state department of wildlife or natural resources should be consulted before considering owning or raising reindeer.

Good is how Jeff Coates describes his life raising reindeer.  After all, what other business could put you this close to being in Santa’s line of work?  The look on his face as he describes putting his reindeer on SnowCats and taking them to Christmas parties around Aspen or arriving in a shopping mall with Santa riding in the sleigh tells it all.  He loves what he’s doing.

2021 Update:  The Flying Deer Ranch is no longer in existence.  But if you’re in the Denver area and would like to have reindoor for a special event, call Moon Deer Ranch at 303-907-9007 or contact them at moondeerranch@aol.com.