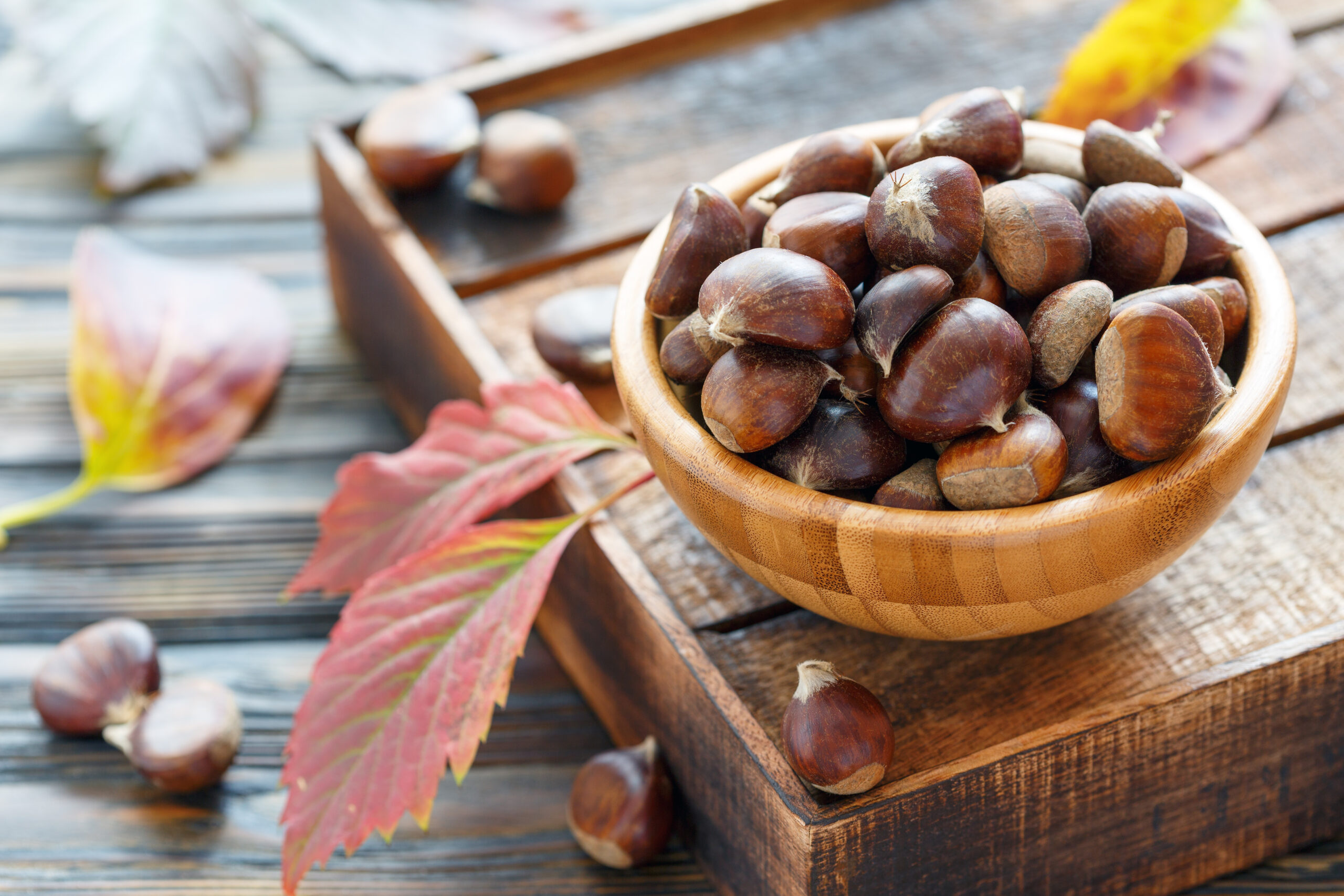 Autumn brings to life our love affair with nut trees.  We gather up buckets and baskets, pouches and pots, and make our way into the backwoods to uncover our favorite kernels.  But only one nut, the chestnut, will be forevermore immortalized through song and poetry.

Anyone who thought the lyrics, ‘chestnuts roasting on an open fire,’ simply filled a phrase surely never tasted these delicious treats.  And if you are lucky enough to be served by a sidewalk vendor in black tails and top hat, then the step back in time to old London town will convince you there’s a lot of romance, if not a little bit of magic, to this special nut.

With every love story, however, there comes some tragedy.  Here, it’s a case of blight.  The native American chestnut, which produced small but flavorful nuts, was brought to the edge of extinction by an exotic bark disease in the early 1900s.  The fungus was brought to New York from the Orient.  The Chinese and Japanese species were resistant, but their American counterpart fell prey.  Within fifty years it destroyed virtually all large American chestnuts from Main to Alabama.  Stump sprouts still survive in its old territory, but the blight takes them out when they reach bearing age.

Perhaps that perseverance is what motivated poet Robert Frost in 1930 to write Evil Tendencies Cancel:

Will the blight end the chestnut?

The farmers rather guess not.

It keeps smoldering at the roots

And sending up new shoots

Shall come to end the blight.

Maybe someday a blight-resistant strain of the American chestnut will be developed.  Meanwhile, most sold in the United States are imported from Italy.

This doesn’t diminish the value of the chestnut as a food source, however.  While very little grows in this country, it’s considered the greatest food crop in the world.  That’s because it contains 50% starch, 5% oil and 5% protein.  It has the lowest fat content of all the main edible nuts at 4 to 5% compared to 62% for the filbert and 71% for the pecan.  Its carbohydrate level stands at 78%.  Filberts are far behind at 17% and pecans, 15%.  They’re also low in calories:  about 1700 per pound.  Compare that to 2900 for filberts and 3100 calories per pound for pecans.

As you can see, it stands by itself as a well-balanced food.  In fact, the countries that produce chestnuts, including all of southern Europe and much of China and Japan, grow the nut for food, not as a luxury.  Because of its starchy nature, texture and growing habits, its culinary uses are numerous.

The Iroquois Indians of New York, in pre-Columbian times, ate the nuts raw or pounded, boiled them to form lumps of doughy bread, or cooked them in their corn bread.  In 1612, Captain John Smith noted that the Indians in Virginia would boil chestnuts for four hours, then made “both broth and bread for their chiefe (sic) men or at their greatest feasts.”

Xenophon, a Greek historian of the fourth century B.C., states that the children of the Persian nobility were fattened on chestnuts.  Charlemagne commended the propagation of chestnuts to this people.  The Romans took it to France and Britain.  In fact, a flour called polenta, made of ground chestnuts, was a staple for the Roman legions.

A sixteenth-century custom in British cookery became famous through Nat King Cole’s The Christmas Song.  Roasting chestnuts over a fire is done by making a slit or puncture in the skin of each nut placed in the pan, except one.  When that one explodes or bursts, the others are ready to eat.  A note:  do not forget to cut the others or the surprise will be totally yours!  Shakespeare surely had this in mind with Petruchio’s speech in his Taming of the Shrew, Act 1, Scene 2:

And do you tell me of a
woman’s tongue
That gives not half so great a
blow to the ear
As will a chestnut in a farmer’s fire.

In France, “marron” chestnuts, which are larger and sweeter, are preserved in syrup with sugar and spices to make ‘marrons glaces” and other delectable French sweetmeats.  Fritters made from chestnut flour are also considered a delicacy.

When times were not so good the fancy treatments gave way to the practical.  G. H. Powell, an authority on European and Japanese chestnuts, wrote in 1899 that in France “the poor people during fall and winter often make two meals daily from chestnuts…Hot steamed chestnuts are carried around the city streets in baskets or pails; the majority of working people, who usually have no fire in the morning, eat them for their breakfast, with or without milk…”

Chestnuts are boiled by the Japanese and eaten as we eat potatoes.  In Italy, the chestnut is called “bread of the mountains” and is still considered the staff of life.  They’re not only boiled and roased but also used in puddings, cakes and breads.  In the coffee-houses of Lucca, Pescia and Pistoia, delicious pates, muffins and tarts are made of chestnuts.

Powell said they use it in Korea “raw, boiled, roasted, cooked with meat, made into confections, powdered and mixed with candy and dried whole…”

The tree itself is a handsome affair often reaching heights of 100 to 120 feet with a diameter of up to six feet.  It can get larger, though.  Southern Europe is filled with enormous old chestnut trees such as the cast agno de cento cavalli or “chestnut of the hundred horses” near Mount Etna.  Some writers at the turn of the century considered it the largest tree of all Europe.  Its trunk measured more than 200 feet in circumference.  Its age estimated at a thousand years.

Henry Wadsworth Longfellow wrote his poem The Village Blacksmith in 1839 about a “spreading chestnut tree” that stood at the corner of Brattle and Story Streets in Cambridge, Massachusetts.  The widening of Brattle Street required chopping the tree down in 1876.  Proof shows it was, instead, a European horse chestnut tree that is not botanically related to the true chestnut and is also inedible.  However, Longfellow probably could not bring himself to use in his piece the rhythmic phrasing “under a spreading horse chestnut tree.”

Before the blight, pioneers used the durable, rot-resistant chestnut lumber for everything from farm fencing to ship masts.  In fact, it was said that chestnut wood “carried man from cradle to grave, in crib and coffin.”  It was also used in the production of tanning materials for leather.

The chestnuts themselves form inside prickly pods.  For that reason, the Indians called the tree o-heh-yah-tah, meaning “prickly burr.”  The burrs split open in early fall, releasing one to three nuts each.  They’re harvested daily, dried for a day or two in the sun, then stored dry at a cool but not freezing temperature.

Sound nuts in the shell, if stored in a cool, dry place, will keep for many months; refrigerated, they will keep a year or more.  Boiled or roasted chestnuts, with the shells removed, may be placed in heavy plastic bags and frozen.  They will keep almost indefinitely and be ready for a variety of recipe uses. 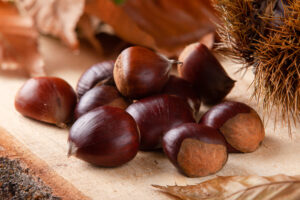 Fresh chestnuts are in season from mid-September to March and can be purchased in bulk by the pound.  Look for hard, shiny brown shells free of cuts and spongy areas.  The rest of the year specialty food stores will carry canned chestnuts in a variety of ways:  whole roasted, peeled in water, creamed, etc.  One pound of chestnuts, in the shell, yields about two and a half cups nutmeats.

Chestnuts are especially popular this time of year in stuffings.  But why limit yourself?  You could use them effectively in every course.  This maybe going overboard, but you will find several ideas here for expanding your use of this versatile nut like Candied Yams and Chestnuts for a variation on vegetables.  Warm, mashed chestnuts with butter and milk is very easy as well as good; and your favorite Waldorf Salad will have a new twist to it with chestnuts instead of walnuts.

All fresh chestnuts must be shelled and skinned before using.  But the process is not difficult if the directions are followed.

Cut a half-inch gash on flat side of nut.  Put in a skillet, allowing ½ teaspoon of butter to each cup of chestnuts.  Shake over heat until butter is melted.  Put in oven and let stand five minutes.  Remove.  With a small knife take off shells.  This method accomplishes shelling and blanching at the same time, as skins adhere to the shells.

Place in a saucepan and half cover with water.  Boil 20 minutes, empty water and leave chestnuts in the pan to dry off before shelling.  By leaving on low heat and drying slightly, the chestnut kernels do not crumble upon shelling.

Remove shells from one pint of chestnuts, put in a baking dish, cover with stock, season with salt and pepper, bake until soft, keeping covered until nearly done.  There should be a small quantity of stock in pan to serve with chestnuts.

After making a cut through the shell near the base to avoid bursting or exploding during roasting, place the prepared nuts in a pan and put in moderate oven at 375 degrees.  When chestnuts appear about three-quarters roasted, remove from oven and place them in the folds of a wool cloth to keep them soft while cooling down.

Microwave:  After slashing the shells, arrange on a nine or ten-inch glass plate.  Cook in microwave oven uncovered for five minutes or until shells pop open where slashed, stirring once.  Serve after opening shells and removing nuts.  If they become cold, return to oven for a few seconds until steaming again.

Roast or boil desired amount of chestnuts and remove shells.  Sprinkle with salt and cook in skillet in butter (enough to grease well) for about five minutes.  If more seasoning is preferred, sprinkle with pepper, Worcestershire sauce or Tabasco sauce.

Melt chocolate in the top of double boiler over hot water.  Cream butter until fluffy.  Stir in vanilla and chestnut cream.  Beat in melted chocolate and beat until absolutely smooth.  Line bottom of eight-inch layer pan or pie pan or 8x8x2-inch-square pan with waxed paper.  Press mixture into pan and chill.  Unmold and remove waxed paper.  Decorate with whipped cream and chocolate curls.