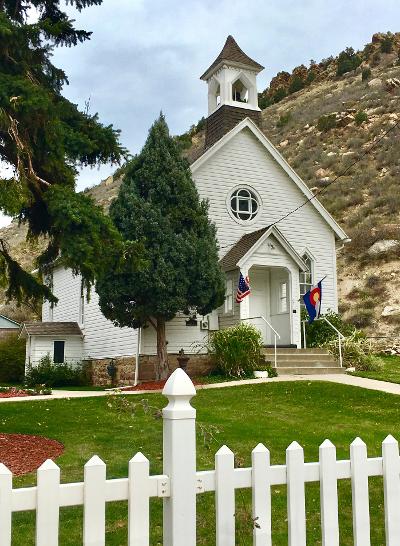 Colorado’s history leaves no doubt that the beautiful hills and mountains here are full of gold.  But there’s one gem that doesn’t need mining.  It sits in full view of everyone and that’s the Historic Morrison Church in Morrison.  We know it better by its nickname, the “Little White Church.”

The Little White Church sits at 111 Market Street.  Included in the property, and surrounded by a white picket fence, is a home and garage.  When George Morrison, Sr. first founded and platted Morrison in 1874, Market Street was considered to be “Main Street,” running north and south.  Main Street today runs east and west due to a number of historical events including major flooding that all but destroyed our little town.  After that, surveying changed the direction of Main Street.

Our version of ‘the little church on the prairie’ was built in 1885.  The book, From Scratch:  A History of Jefferson County, put together by members of the Jefferson County Historical Commission, says the Morrison Business Directory of 1874 claims the town was made up of 150 people, and “was served by the Methodist Episcopal Church, under Reverend W. C. Roby.  In 1884, the Methodist Episcopal Conference Journal reported that a church had been built at a cost of $600 and that the membership was 56.”  Circuit riders conducted the first services, but when the depression of the 1930’s came along, students from Iliff School of Theology stepped up to do them with no pay.

If you look at the accompanying photo, which was dated “Early 1880’s,”you will notice the church under construction.  There also is what looks like a path passing directly in front of it.  Those are actually railroad tracks.  George Morrison and the sitting Governor, John Evans, worked together to bring the Denver, South Park and Pacific Railroad to Morrison.  According to an article entitled “Traceries” from the 2003 Historically Jeffco publication, it cost $1.50 for a round-trip from Denver and there were two trains daily.  Six-horse stagecoaches would meet the trains in Morrison for a “one-day trip to Fairplay, up Turkey Creek and over Kenosha Pass.”

Although many floods caused great damage to the Morrison area, it was the one in July of 1933 that caused the Denver and South Park Railroad to abandon their service after 60 years of operations.  A number of their bridges and a portion of the railroad’s roadbed were washed out and never rebuilt.

The church was purchased in 1938 by the Pillar of Fire Church.  According to the Morrison Historical Society website, the church and house next door was bought together as a memorial to Alma White who was a founder and bishop for the Pillar of Fire Church, a Methodist Christian sect whose members were called ‘holy rollers’ or ‘holy jumpers’ because of their religious frenzy.  In fact, she was the first woman in the United States to become a bishop. 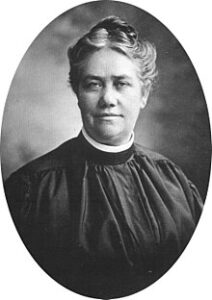 What’s interesting about Alma White is the story I’d heard involving a ‘vision’ she had that led to her starting the Pillar of Fire Church.  I was able to document this event when I found a paper in the Morrison History Collection located in the Jefferson County Archives offices.  It was entitled “Morrison Historical Guide” and listed a number of addresses in town with information about each location or the people who lived there.  For the church address, it says “Alma White, the minister’s wife, had the ‘great experience’, as she called it March 18, 1893.”  Her husband was Reverend Kent White.  Another document explained that she experienced “sanctification, a deep soul rest.”  It goes on to say that ‘This milestone which led directly to her preaching career, happened during her residence in Morrison in the church….”

The rest is history.  She was known for being quite the feminist of her day and for being quite the preacher. But Kristin Kandt in 2000 published “Historical Essay…The Story of Alma Bridwell White” in the Journal of  Gender, Social Policy & the Law which states “Alma White and the Pillar of Fire were unique, however, in their public alliance with the Ku Klux Klan. In fact, the Pillar of Fire was the only religious group to publicly associate itself with the Klan.”

According to Wikipedia, she “built 49 churches, three colleges. She edits six magazines, travels continually between Zarephath (New Jersey) and the West. … She has two radio stations, WAWZ at Zarephath, KPOF in Denver, where her Alma Temple is also a thriving concern. …”  Today, the Pillar of Fire has branches in Zarephath, Westminster (CO), Denver, Cincinnati, LA and Pacifica, California.  She passed away in 1946 and is buried in the Fairmount Cemetery in Denver.

Pillar of Fire sold both properties in 2013 to Morrison Chapel, LLC owned by Debbie Matthews and Mike Dunafon of Idledale.  Debbie is a descendent of the Matthews family who sold land they owned since the 1880’s to the Jefferson County Open Space Program to create the Matthews/Winters Park located on the south side of I-70 and Morrison Road.  Debbie says she HAD to buy the church when it came up for sale because her grandfather had gone there his whole life.  She says there was much interest in the property going up for sale, but she got the first offer in and now she owns a church.

Skip Campbell, Grounds and Church Guardian, lives in the house next to the church in what was once the home of Charley Pike.  According to the Morrison History Collection, Charley Pike was a nephew of Zebulon Pike of Pike’s Peak fame.  The Pike’s were merchants in Morrison.

It’s quite natural to assume this building might have been a parsonage for each current minister in residence at the church, but the two properties were never together until the Pillar of Fire bought them at the same time.  Campbell says the house he lives in has most  often been a home, but it’s also held several businesses.

While the church has no basement to speak of, there is a small building on the side between the church and house that was originally a tool shed, according to Campbell.  At one time it was converted to an office for one of the resident ministers and then went back to being a tool shed.  When Matthews and her husband bought it, they converted it to a Bride’s Room with a vanity and mirror.  Debbie’s daughter, Shannan, painted it and it’s the perfect place for bridal parties to prepare for their special ceremony.  In fact, Shannan rents out the church for weddings, holiday events, baptisms, vow renewals, bicycle weddings, and celebration of life events.

Campbell also says the seating in the church was originally wooden benches.  They were not comfortable, as you can imagine.  Through some old fashioned horse trades with a movie house from La Junta for their theatre-style seats, and pews from a church out by the Kansas border along with a cash donation to that church’s children’s group and a promise to remove the chairs by the deadline the church was facing, better seating finally ended up in the Little White Church.

When Pillar of Fire owned the property, they would lease it out to whatever Christian sects needed it.  It is still a working church today with a non-denominational service open to the public every Sunday at 9:30am.  Two private bible studies are held during the week.  Shannan says the nice thing about this place is her ability to be flexible with schedules and problems.  A last minute event can be quickly put together with much more freedom than larger locations.  She only requires a minimum of 2 hours of use.  She considers it to not only be very affordable, but definitely “Authentic Colorado”.  More information is available at HISTORICMORRISONCHURCH.COM. 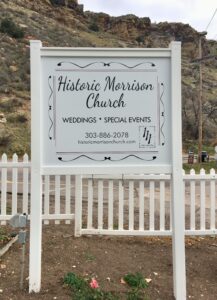 The Little White Church in Morrison is the epitome of the small country church.  Its simplicity lends itself to providing a quiet space not encroached by the trappings of fancy decorations or furnishings.  It offers up what one would hope to find in a sacred, religious spot.  But don’t underestimate its peaceful, serene appearance.  This church has witnessed many things over the past century and withstood many floods and changes over time.  Guess you could say that’s a strong foundation, literally and metaphorically.  Let’s hope it survives another hundred years.